Each of these four lashings can be used to join two spars together to make an extension. With each there are no frapping turns. The manner in which these lashings need to be applied results in the spars being in a position where they are already tightly touching. Taking frapping turns between the parallel spars would only weaken the connection.

The objective is to combine the spars together to make a longer length that is as rigid as possible. So, connecting two spars in this fashion definitely requires a good overlap between them. Obviously, it also requires two lashings, each tied tightly well near the ends of each spar where they overlap. 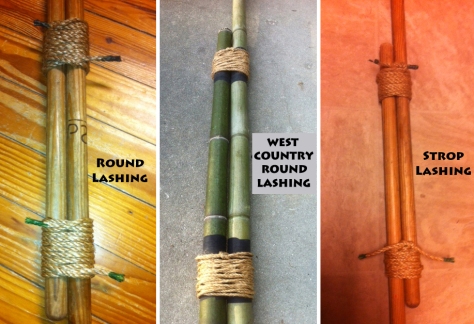 In his book Pioneering Principles, John Thurman refers to this round lashing as a “Sheer Lashing Mark II” (sheer spelled with two e’s). Same lashing and it’s interesting that he’s fond of starting the lashing with a timber hitch around both spars for added rigidity, and then finishing with a clove hitch after taking at least eight tight turns. When the poles are smooth, the traditional round lashing can be made more secure by adding additional half hitches to the clove hitches.

West Country Round Lashing. As Adolph Peschke says, this method of joining two spars with a series of tight half knots and ending with a square knot is very strong and effective. When extending the length of two heavier spars or when constructing a very long pole, the West Country Shear Lashing is an excellent choice. Follow this link to Lashing INFORMATION and scroll down for further information and a West Country Shear Lashing diagram.

Note: This lashing should rightfully be called a West Country Round Lashing, in that (like all round lashings) it has no frapping turns and is used to form a rigid connection between two parallel poles. By contrast, shear lashings are used to form a flexible joint needed when constructing shear legs.

Strop Lashing. When a quick job is desired with light spars, a simple strop lashing will often suffice. Find the middle of the length of binder twine or lashing rope and tightly wrap both ends simultaneously in opposite directions around the poles finishing with a square knot. Follow this link to Lashing INFORMATION and scroll all the way to the bottom for further information.

Half Hitch Round Lashing. A fourth form of round lashing is made by tying a series of interlocking half hitches around both spars. Like the West Country “Round” Lashing, which tightens and secures each of the wraps with a half knot while working both ends of the rope simultaneously, this method accomplishes the same thing by applying a tight half hitch to each wrap. The final lashing features what resembles a two-strand French Braid twisted diagonally around both spars!