In his eye-opening, and informative edition of the Pioneering Merit Badge Pamphlet, Adolph Peschke puts forth comprehensive designs for five “Scout-sized” pioneering projects that capture and preserve the timeless legacy of Scout Pioneering. In addition to the Double A-Frame Monkey Bridge and 14′ Double Ladder Signal Tower, three others, the traditional Single Lock Bridge, the Single Trestle Bridge, and the Single A-Frame Bridge embody real Scouting ingenuity and teamwork. “Scout-sized” structures can be useful or just plain fun. Either way, in their construction, they invariably furnish a joyful sense of accomplishment.

The well-known, time-tested, traditional Monkey Bridge is perhaps the most familiar of all Scout pioneering projects. It’s frequently featured at Scout Expos, Camporees, Scout Camps, and is often a central attraction at public gatherings where Scouting is represented. Using a double A-frame to build a monkey bridge is a departure from the usual X-frame that supports the foot rope and hand ropes. This new method has two distinct advantages over the X- frame version. (Read more.)

Bridges are the mainstay of fundamental Scout Pioneering. They truly embody what pioneering is all about. To open up the frontier, pioneers built BRIDGES. To this day, the most familiar and most  functional of all “larger” pioneering projects are bridges. The single lock bridge detailed on this site is a well-established and basic design. (Read more.)

This simple crossing bridge uses only a single trestle and two walkways. The legs of the trestle are extended up above the walkway to provide a way to attach a handrail. The triangles formed by the handrails lend stability to the project and provide added ease for crossing. (Read more.)

The simplest of all double walkway crossing bridges supports the walkways with only an A-frame and added transom. The bridge is sturdy, stable, and requires the least amount of materials and time to build. (Read more.)

The Chippewa Kitchen can be seen as the indisputable KING of all “camp gadgets.” It’s the ultimate camp kitchen pioneering project, providing a huge element of convenience to a wide range of camp cooking operations. The Chippewa Kitchen can provide a raised surface for food preparation, a nifty place to hang tools and utensils, a framework from which a pot can be safely suspended over a cooking fire, and primarily, a convenient, raised cooking surface for cooking over hot coals. With this design, you can build a cooking fire under one or both tripods and suspend a pot over each. (Read more.)

According to some revised standards and under special circumstances, Scouts can again climb the 14′ Double Ladder Signal Tower.  It remains a wonderful engineering challenge, and the process of building and erecting one is a very rewarding endeavor. (Read more.)

Using the 14′ Double Ladder Signal Tower as a point of reference, this design is for a very tall campsite gateway that stands out (and up) and serves as an impressive feat of Scout engineering.

Lashing on a flag attached to its own pole on each corner creates a spectacular effect!  (Read more.)

To welcome attendees to a special event or to share an outstanding message, a high-flying banner can fill the bill with impact. And if  you want to celebrate the occasion with an array of appropriate flags, this gateway can sport a series of six. Two triangular prisms lend stability to this structure and provide the wherewithal to support a large banner with ease. Note: unless you can find spars that are straight as an arrow, a great idea is to make it out of bamboo! (Read more.)

What is wonderful about this table is how sturdy it is for seating, eating and meeting. In many respects, this can become the campcraft area’s figurehead—the design being so impressive and the attraction to sit in it being so strong. The structure is so sound, when Scouts throughout camp visit the Scoutcraft area they have to be instructed not to stand on the table top, but instead to treat it as a piece of furniture and not a jungle jim.  (Read more.)

A Swing Boat is a fairground ride in which pairs of riders pull ropes to swing back and forth. At the national jamboree, it’s one of the pioneering area’s favorite attractions. This version uses six 12′ spars and six 10′ spars. Though it’s a smaller, more boy-sized version, it’s still lots of fun. When featured at a district or council event, the structure stands out as a most impressive example of advanced Scout engineering. For stability, all lashings have to be very tight and all anchors solidly built. (Read more.)

This well-designed, pioneering, playground structure will be a popular project. The key is how the design uses two, vertical A-frames each supported with what would be the third leg of a tripod, but instead is actually an oblique, support leg, angled out to yield terrific stability. (Most folks would think you’d support the crossbar between two tripods.) When the lashings are tight, and the anchors are added, this camp swing set is very attractive and inviting. Most everyone loves to swing!  (Read more.)

Overall, a simple project though some precision will be required when positioning the plank at the right height so that riders don’t experience too much tilt. Like with any seesaw, care must be taken not to misuse the structure, but  overall this camp seesaw is a tempting attraction and gets a lot of long-time play and attention. When built with care and guyed down securely, it can withstand  the frequent use it undoubtedly will get, even from heavier riders.  (Read more.)

Building rafts stands out as one of the most fun-filled Scout Pioneering activities. It incorporates all the planning, preparation, and Scout engineering aspects that contribute to the richness of the experience, but inherent in a successful outcome is also the pronounced element of success when the structure can float and actually carry the participants.   Through the years, raft building has played a major role in pioneering activities, and thanks to the often hilarious exploits of John Thurman, during his extended term as Camp Chief at Gilwell, in the Scouting scheme of things, the creative process of designing, building, and riding a raft is part of  a rich Scout Pioneering heritage. (Read more.)

Back in the days when the BSA allowed us to build taller towers, our troop would regularly erect Mr. Peschke’s 14-foot double ladder version, and an idea repeatedly blurted out was, “We should build two towers with a monkey bridge in-between!” Well, for a wide variety of reasons, that would have been impractical. But, what we did do was design a rope bridge that spans a distance between two platforms (8′ mini-towers) and still enables us to observe the present BSA’s 6′ height restriction. (Read more.) 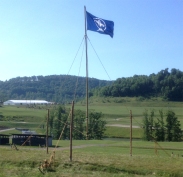 There are many ways Scouts can go about suspending a flagpole off the ground so it looks like it’s floating. Often called a Skylon Flagpole, this project is challenging, and along with some elaborate preparation, might require some trial and error before getting the flagpole to stabilize in the desired position. The end result is impressive, though, and once the concept is grasped, building a floating flagpole might become one of the favorite projects to tackle.

At most Scouting events, there isn’t a permanently-installed, tall, metal pole for raising and lowering the colors. During opening ceremonies at these Scout gatherings, a tall flagpole made by joining long spars together can impress and inspire. (Read more.) In his eye-opening, and informative edition of the Pioneering Merit Badge Pamphlet, Adolph Peschke puts forth comprehensive designs for five “boy-sized” pioneering projects that capture and preserve the timeless legacy of Scout Pioneering. In addition to the Double A-Frame Monkey Bridge and 14′ Double Ladder Signal Tower, three others, the traditional Single Lock Bridge, the Single Trestle Bridge, and the Single A-Frame Bridge embody real Scouting ingenuity and teamwork, and can furnish a joyful sense of accomplishment in the construction of “boy-sized” structures that are practical and useful.