Many different things, both big and small, contribute to increasing the BSA’s rate of retention. In its own seemingly small, but unique and interesting way, this lashing is an actual example. On several occasions, I’ve heard adults and older Scouts remark they wish they knew this lashing when they were a Scout or when they were younger—and if they had, they would have done more pioneering. When it comes to pioneering, the Mark II Square Lashing increases Scouts’ willingness, receptivity, and most of all ability to readily become active in this timeless Scouting activity. Troops definitely become more able to embrace the many rewarding Pioneering Skill Challenges that contribute to making Scout meetings fun with positive outcomes.

Compared to the clove hitch method, Scouts love it. It’s much more simple to tie and some declare it’s even easier to make tight. After he attended a pioneering training session at the 2015 NOAC at Michigan State University, celebrating the 100th year anniversary of the Order of the Arrow, one appreciative adult, who had not yet been acquainted with this lashing was heard to remark, “If I gain nothing else during the week, the fact I learned this lashing will be enough.”

The sad part has been, during district, council and area events, simply because they tied a lashing that wasn’t in the handbook, Scouts have been disqualified, penalized, and even insulted, resulting in confusion, hurt feelings, and disillusionment. That’s why, in the 13th edition there should be absolutely no doubt that the Mark II Square Lashing IS a square lashing and NOT an “alternative to the square lashing.” (first printing page 374) That way when it’s stipulated that square lashings are required for a Scouting competition, there’s no confusion! Any Scout or Scouter involved in the building of pioneering projects throughout the year tie square lashings all the time. To most all of them, the Mark II Square Lashing is what is tied whenever a square lashing is tied. Period. For many, that’s how it’s been for all their years as an adult volunteer—happily involved in unit to national-level pioneering programs.

The following is a copy of what was initially submitted through the Boy Scout Development Task Force as an addition to or replacement for page 396 in the 12th Edition of the Boy Scout Handbook. (What’s included in the first printing of the 13th edition has no photographs, but the content is correctly presented.): 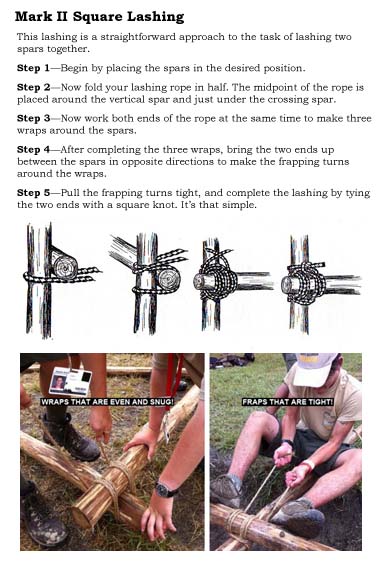