When tying the basic, oft-used, simple “two-half-hitches” (double-half-hitch), instead of

applying a clove hitch around the standing part, there’s a thing about mistakingly tying a lark’s head. This accident rears its head time and again, and many Scouts (both youth and adult) somehow don’t recognize the difference. Fact remains, tying a lark’s head around the standing part (cow hitch) doesn’t provide the same holding effect or friction as forming a clove hitch. Mostly, it does the trick, BUT, it’s not the same and shouldn’t be considered as such. 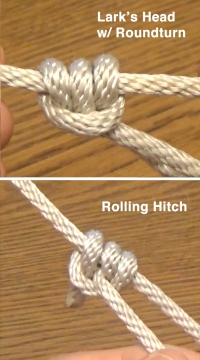 This becomes a “bigger” issue when tying a taut-line hitch. If the half hitches aren’t tied in the same fashion (if the running end isn’t spiraling around the standing part in the same direction), instead of a rolling hitch around the standing part, what you get is a lark’s head along with an extra round turn. This provides less friction. It will not grab the guyline as well, and hence is less effective.

In addition to the campcraft  jobs it does so well, the lark’s head is useful in Pioneering too. Besides coming into play to hang all kinds of stuff, it’s how we start off the Filipino diagonal lashing.