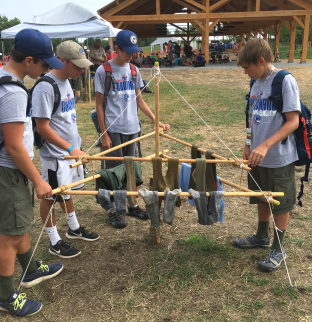 You’ve got to love this design. It’s compact, it’s sturdy, and it’s ingenious!

This drying rack is based on suspending two concentric, equilateral triangles to make six cross sections for hanging wet clothing or towels during a long term encampment, and there’s no reason you can’t put it up on an overnighter if there’s a practical need. All that’s been said before regarding the advantages of this kind of campsite improvement apply to this simple camp gadget:

Lash the triangles. Start by lashing together two equilateral triangles, one smaller for the top (three 4-foot sticks), and the larger one for the bottom (three 5-foot staves). Use square lashings. One easy way is to lash two at 90° and then bend them in and tie the third square lashing to make the triangle. This yields a nice, tightly-lashed triangle, (but be careful you’re not putting too much stress on the ropes and poles when preparing to apply the third lashing).

Erect the upright. Pound in a pioneering stake and lash the 6-foot pole to it securely with two tight strop lashings or round lashings. Making this upright stand up vertically without moving or wobbling at all is a key to a good and sturdy clothing dryer. So, solidly pound in the stake and make sure it’s as straight as possible. Also, make sure the lashings are well-tied and tight.

—> ALTERNATIVE APPROACH: A clothes drying rack can be erected without having to either pound in a stake or sink the center pole, by using the same principle as when erecting a flagpole. The key is using the support ropes as guylines. SEE PHOTO.

Attach the triangles. Lay the triangles on the ground over the upright, first the larger triangle, and then the smaller one on top.

Tie each corner of the smaller triangle to a support rope so it will be suspended about 5 feet above the ground. Use clove hitches which can be adjusted as necessary to assure the triangle hangs evenly and the 4-foot sticks are horizontal. Continuing with each of the three support ropes, repeat this process for the larger triangle so that it will hang about 4 feet above the ground.

Anchor the support ropes. Hammer in a small stake a foot or so out, in line with each corner of the bottom triangle. Using the remaining length of the support ropes, attach them to the stakes with a simple taut-line hitch. This will further stabilize the clothing dryer and enable you to make fine-tune adjustments to the way the triangles lay. (You can also just make them fast to the stakes with a roundturn with two half hitches, or another clove hitch.)